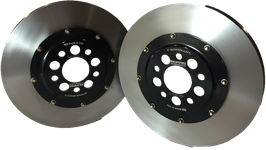 This pair of front rotors are a direct replacement for the original rotors.  Fits all models with the 14" Brembo front brakes including the Track and Brembo package equipped Mustang GT 2010-2014, the Boss 302 2012-2013, and the Shelby GT500 from 2007-2012.  (This part does not fit the 2013-2014 GT500 which feature a 15" six-piston system).  These rotors can also be used when adding Brembo calipers to the V6 model which has become a popular modification.  Each rotor is 18.0lb which is 8lb less than a new OEM rotor.  The pair reduces total weight by 16lb in all the right places: Front of the vehicle, unsprung, and rotating.  Unlike some modifications that only remove weight from the sprung mass (body) of the vehicle, this change is very noticeable during acceleration or braking.  (A Heavy Casting version is available for sustained track use.  The weight of each rotor is increased by 4lb over our Lightweight standard version. )

This replacement rotor "ring" can be used to replace the worn component when thickness wears to less than 30mm.  Includes new hardware.  Please specify Left or Right individually, or a Pair when ordering.